A month ago, no one predicted the magnitude of the virus epidemic that is now gripping the world. I wrote about breaking the silence around Idlib in Syria, and about Greece, which has been turned into the European dumping ground for unwanted refugees.

We are now seeing a consequence of the European aversion to refugees: a potential source of contamination has been created that is unparalleled. As everyone in Europe is being urged to self-isolate and practice social distancing, tens of thousands of people locked up in Greek refugee camps waiting for an epidemic that will endanger not only them, but us as well.

A horrifying example is Camp Moria on the isle of Lesbos, where 20,000 people are penned like cattle instead of the 3,000 for which the camp is intended. Yesterday I learned of SOS Moria, an initiative of thousands of doctors, who are urging Europe's rulers to evacuate Moria and other camps, get them out of there and give them a safe refuge:

Join these doctors and sign the SOS Moria appeal

Something needs to be done urgently, yet Europe still chooses to look the other way, hiding behind EUR 2 or 3 billion in emergency aid already given to Greece to solve the European problem. 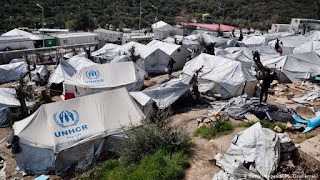 The refugee drama plays a leading role in my novel De Batavier (The Batavian). As an author and as a person, I cannot and will not stay silent about European heartlessness and xenophobia.
Something - must - be - done.
at April 04, 2020