When I start a new book, full of enthusiasm and energy, the first chapters almost write themselves. I have a theme in my head that cries out to be written, and the book is still completely open to me. These are the most carefree days of my authorship.

As soon as the first chapters have been written and I read back the text, doubt forms in my mind. Why not write this passage just that bit differently? Does this fit the theme or am I in a dead end? Will it still be fascinating to read? I may read my manuscripts hundreds of times to preserve the initial good feeling, or to regain it when uncertainty has struck.

My writing behaviour could best be described as 'organic' - there is a rough plan, but the second half of the book is usually still shrouded in mystery. That gives me freedom, but also doubts. Halfway comes what in cycling is called the 'man with the hammer'. Progress bogs down and sometimes the work lies dormant for weeks. Then I often find something enabling me to continue.

After writing the first half of The Batavian I felt that my theme was exhausted. I absolutely didn't know how to proceed and in the end the trick I used was to insert a three-year break in the storyline. The protagonist then looks back at what happened and gradually we end up in the present and how it goes with him. From there, the events develop automatically.

Currently I am working on a third book, where I also ran into trouble. So I am in the middle of doubts, try a chapter this way or that, and then put most of it aside again. Sometimes I get an idea and I can reuse a small part. But sooner or later the breakthrough must come and I know how to proceed.

I wonder if other authors are going through this. If you are reading this, you are cordially invited to answer it ...

Photo: an alley on Kastellorizo. 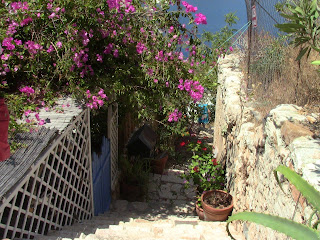