A central theme in my book The Batavian is the refugee drama that still takes place around the Greek islands.

For a long time there has been migration from the war-torn Middle East to Europe. At first this mainly concerned Afghans and Iraqis. From the beginning of the civil war in Syria in the aftermath of the Arab Spring in 2011, people in Syria also fled the violence, first in their own country and to the surrounding countries, later also to Europe. The escape route originally ran via the Turkish mainland to the border in the north of Greece, until a fence was placed there in 2012 and the refugees had no choice but the dangerous sea route from Turkey to the Greek islands. 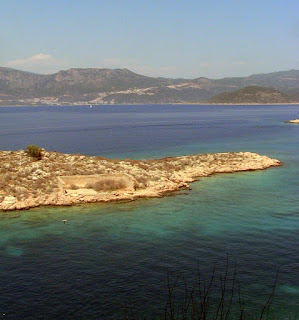 Photo above: it looks so peaceful, the stretch of sea a few kilometres wide between Kastellorizo and Kaş, but in strong winds it can get quite rough and in winter it is cold and inhospitable. At the time of my sailing holiday in the Turkish coastal area in 2013, there was still no sign of a refugee crisis here. In the following years, however, a real migration would arise. Especially in 2014 and 2015, large numbers of Syrians migrated to the west. This resulted in a peak in the refugee flow overseas from the Turkish coast to the Greek islands and many deaths during the dangerous crossing. In that period Western European rescue services established rescue stations on the islands, which until then had few rescue facilities. The Dutch KNRM, a similar organisation to the RNLI, was active on Chios. 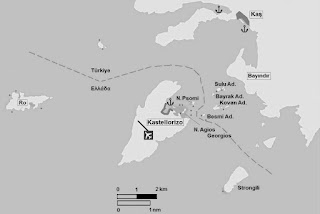 The Batavian is largely set against the backdrop of the chaos surrounding the Syrian war and the refugee flow in the period 2013-2016: the bombing by Assad of civilian targets in Aleppo, the Turkish camps, the dramatic events in the Turkish coastal waters and the inhumane situation in the Greek refugee camps, which continues to this day. The story is fiction, but based on eyewitness reports, press releases and reports from humanitarian organizations.
at December 23, 2018