The sea at night

At night the sea is a very different lady from the daytime. She is a hard mistress and even by day doesn't like to be taken lightly, let alone at night, when we humans lack most of our most important sense, vision. That is when we have to be extra careful.

Lying at anchor or sailing at night is a wonderful experience. I became addicted during my seafaring career. The most beautiful moment ever was in the Indian Ocean in 1976, with sultry tropical weather, the sea sparkling through a tiny organism called Noctiluca Scintillans, stars above me and dolphins that drew luminous traces alongside the ship. A dolphin can, for some time, keep up with  a cargo ship that runs at 16 knots, almost 30 kilometers an hour. They like nothing better than frolic with the bow wave and apparently it doesn't matter whether it is dark either. In addition to their eyes, they have a much better sense for underwater use: their hearing and a refined form of echolocation.

At sea, stars are usually a bit blurry, because the air above sea areas is often damp. But occasionally you are lucky and there is a beautiful clear starry sky, although never as beautiful as I once saw it in a small village in the interior of Ghana. That was a real 'African Sky', with stars that you could almost touch and the broad illuminated band of the Milky Way diagonally across the sky. 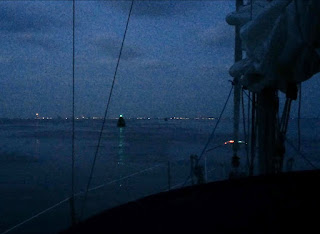 While sailing at night you develop a sixth sense for your position and use all your navigation aids. There is no magic involved: above all it is a continuous alertness to everything you see or feel. Illuminated buoys, lighthouses, light spots on the horizon, other ships, the water depth and also the behaviour of your boat.

Photo above: in August 2018 I came solo from the sea into the port of Harlingen, the final miles in the dark, which is not allowed because in this area, after dark you should use radar, a gadget that my boat does not have. Just before arriving in Harlingen a line squall came over, and a little later I came into harbour. For a moment I drifted around in the outer harbour, slightly disoriented, until the port service saw me and opened the outer bridge. I moored alongside a charter barge and was able to sleep quietly that night. 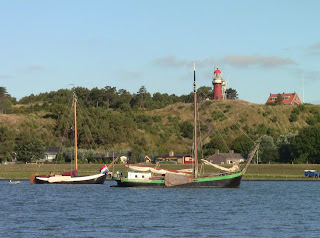 Anchoring at night on the Wadden Sea, inside the Frisian island chain, is always a gamble. When the tide comes up and the wind comes from the wrong angle for a while, you'll be tossed about the rest of the night without being able to close your eyes, with your ears set at the anchor alarm on your GPS. The photo above shows such a place just below Vlieland. Nice spot, you might think, but the previous night it blew a bit against the tide, making life uncomfortable. Sometimes I have to beat it at first light to a more sheltered spot. Nevertheless, I often let myself be seduced to such an adventure. It remains tricky, but also very nice ...
at December 23, 2018