Writing is fun, but publishing is hard work! My new book De Batavier is now approaching its final stage. Months ago, most of the correction work was done by my agent (HT-C Communicatie), who also found the publisher (Palmslag publishers) for me.

Before Christmas I got final printing corrections from the publisher on the manuscript. Inevitably this caused a lot of work. In part this was related to spelling changes in which seafaring slang had been altered to what is known as 'preferred Dutch spelling'. These changes had to be reversed as they were detrimental to the atmosphere of the book.

Apart from this and despite the extensive earlier editing, we still found some flaws and stylistic errors, which I always make during writing. Like all authors, I am blind to my own style errors. You can re-read your text a hundred times and they pass unnoticed. The book in print will number about 290 pages, rather more than I envisaged. 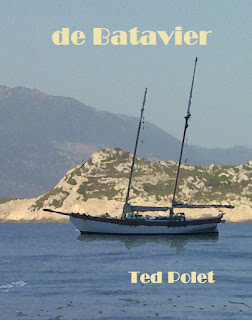 The nice idea shown above which I had for the cover design, of a two-master such as the Batavier against the Turkish coast, as expected was rejected by the publisher. The resolution of the design wasn’t enough for a cover. They came up with a different design - an aerial photograph of a sailboat in an immense expanse of water, which expresses the lonely voyage of the protagonist on his way to the Mediterranean Sea. Although the photo shows a small boat of maybe 8 meters with a second crew member on the front deck I found the idea so attractive that I accepted it almost immediately. 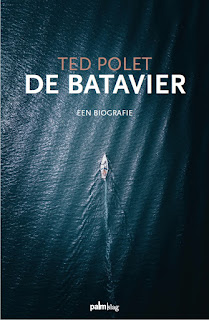 Meanwhile we are also looking for a location for the 'launching' of the book (it is like a moon rocket) in my home town of Leiden. This can either be in a bookshop or in a public library. The first contacts have already been made. In addition, I have developed various activities on the internet, such as this blog and films that I made five years ago in Turkey and Kastellorizo. You will find the link to my Youtube channel at the top right of this page.

Publishing and promoting a book, even for the author it seems, slowly turns into a full working day...
at January 05, 2019