Occasionally I am confronted with something from reality that is directly related to one of my books. Yesterday there was an announcement in the news of the documentary For Sama, filmed by Waad al-Kateab in Aleppo in Syria in the years 2011-2016, which is presented at the IDFA documentary festival. I immediately watched the trailer of the film on YouTube.

The images reminded me of an episode from my book The Batavian, describing what happened to main protagonist Leila Hammadi:

…She didn’t hear the helicopter taking up the assigned position and dropping a barrel bomb. A deafening explosion shook the building, which immediately filled with smoke and dust. Where the bomb had hit a fire broke out, but a far worse consequence was that the already weakened building started to totter and sway.
Leila had woken up to the explosion and looked round in the dust cloud coughing and disoriented, as she tried to get up. The only lamp in the room made a reddish sheen through the dust and she heard the building around her creak and groan as the overstrained beams and reinforcing rods sheared and bent. She suddenly remembered what her father always said: if a building is about to collapse, hide under something strong. She just managed to dive under the desk before the building collapsed and the concrete floor above her slammed down. The four story building went down inside two seconds, and the steel desk partly crumpled, but underneath there was a half-metre clear space where she lay pinned down…
The Batavian is fiction, created in an ordinary living room in the Netherlands, where in 2016, shocked by the news, I tried to describe what was happening in Syria. Experiencing raw reality in person must be very different from writing fiction in a safe environment.

In the film by Waad al-Kateab you see the impact of bombs almost next door, people cringing at the blast and a dust cloud full of smoke and sparks entering the building. You see what it does to her as a mother as she has to comfort her child when the bombs are falling close by. The emotion almost got the better of me. 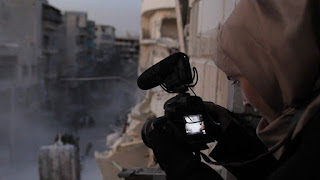 Waad’s husband Hamza worked as a doctor in an emergency hospital in the ruins of Aleppo. She filmed at home and in the hospital under war conditions. Ultimately, Hamza, Waad and daughter Sama managed to flee Aleppo in 2016 with hundreds of hours of video footage of the siege of Aleppo by the Assad regime. The images from the trailer of the film show the harsh reality of living and working in a war zone.

For Sama is dedicated to Waad’s daughter Sama, who features in the film as a baby and toddler. The film has already won many prizes - it is on the screen in the UK and France and will be shown in the Netherlands in January. I'm going to view it as soon as I can.

A trailer of the film can be found here: