Last week I ordered a second edition of De Batavier (The Batavian) from the publishers. There is still a small stock available for bookstores and I still have a few copies myself, but the numbers are shrinking, so a second edition was really needed, all the more because I have some lectures planned. It will take a few weeks before the second edition is available, but it is of course a memorable fact for me as an author ...

Lectures? Yes, the next one is on Friday, November 15 in the public library of Medemblik, at 2:30 pm. Illustrated by a slide show and various attributes, I will tell something about seafaring, sailing and writing. My book will of course play an important part in this. 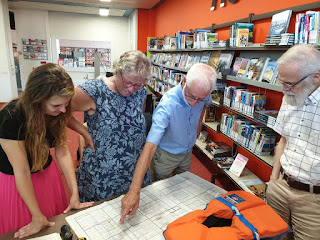 The wet autumn has seriously messed up my sailing plans. I last sailed on September 25, on the IJsselmeer in beautiful weather: 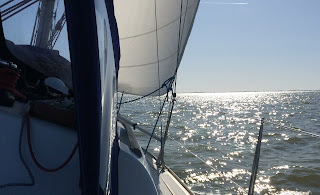 I remember that it was quite windy on that day, I had to reef down. From my berth at Andijk I sailed around a bird sanctuary about halfway between Medemblik and Stavoren. Below is part of the course I have sailed. 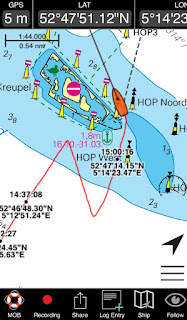 After that the weather turned ugly, one depression after another passing over.

In my house there is an ancient instrument for measuring the air pressure, a so-called 'thunder glass', the contents of which overflow through the nozzle when the air pressure drops. It is an inaccurate instrument, but it tells flawlessly when bad weather is coming. 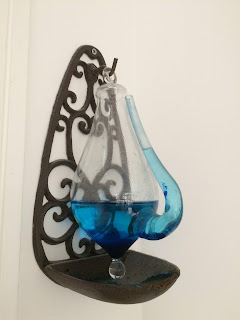 The photo below shows an anaeroid barometer, an accurate instrument with hollow metal bellows that are compressed more or less by changes in atmospheric pressure. The movement is transferred to the pointer. If we look closely at the instrument, we see such a bellows with a ribbed surface: 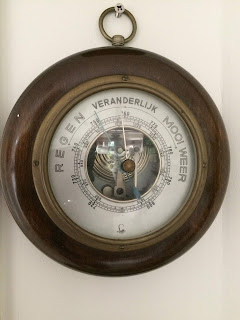 I have a better barometer on board my boat. It has a history - it belonged to my old friend Herman, who was my mentor on one of my first sea voyages. He was at sea for years, eventually as a Captain, and after his death I inherited it. The instrument was a gift to him from the Dutch Weather Bureau in the 1970s, given for 25 years of accurate meteorological observations at sea. The brass plate underneath is a reminder of that. 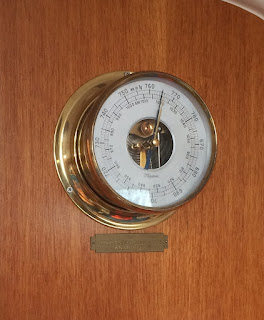 Today, the weather satellite network is so much developed that this kind of observation on ships has  become less important. But this barometer is a good reminder of a time long gone by and of the first-class sailor Herman was.

Finally an instrument for measuring the air pressure, also left to me by Herman. This is a barograph, a recording barometer: 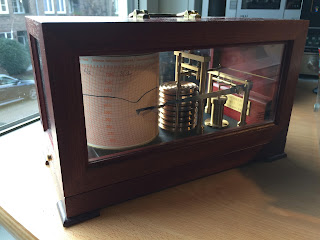 The ink currently needs replacing (it can be ordered from a company in Amsterdam) and it needs a new battery, but it is fully functional. In the ships I sailed in, we always had one in the chart room, and I remember that in the tropics we could easily observe the daily variance of air pressure on the recorder chart, a few hPa (hecto Pascal) up and down every day and night. At that time we still called it Millibar, by the way...
at October 24, 2019